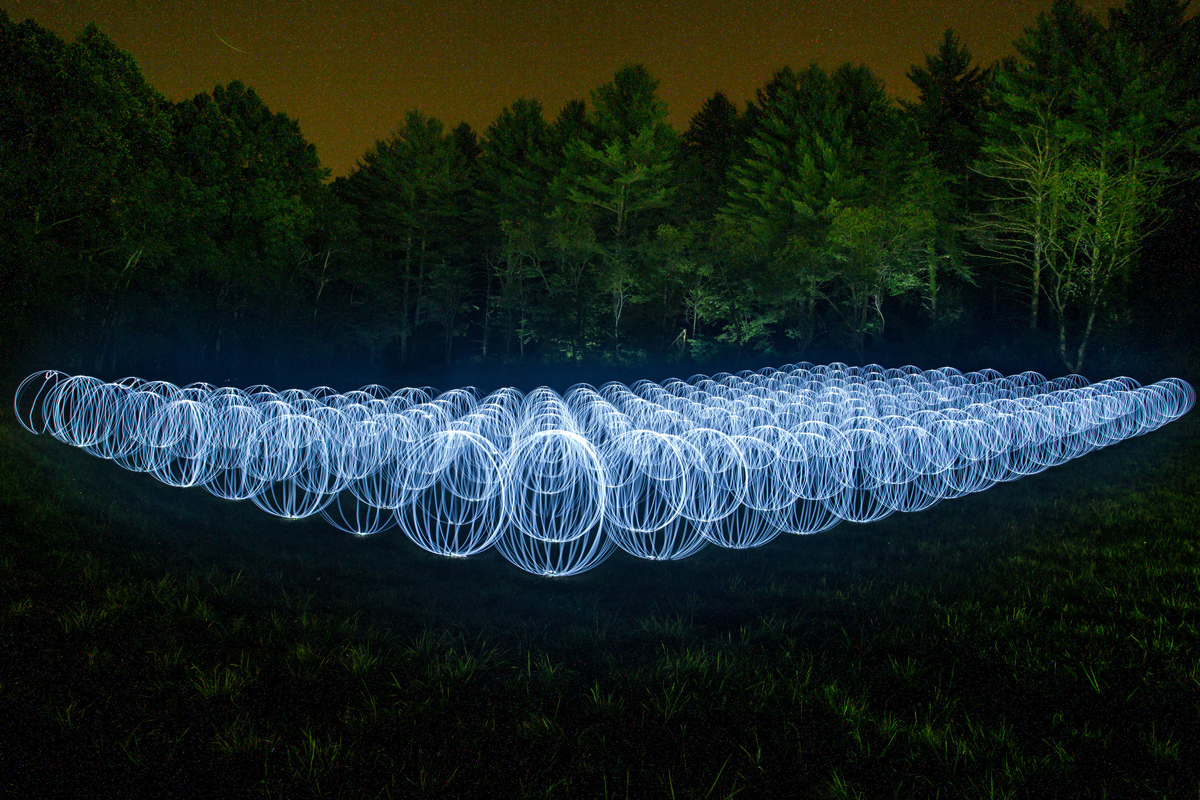 That’s the short story, read on for the details.

The first and most important part of this story is that it was a group effort. Setting this record was a massive amount of work, without all of us working together this most certainly would not have happened. January 6th 2014 Light Painter Jason Rinehart (inspired by Andrew Wells “Century Of Light Orbs” Project) put up a post on Facebook asking “Anyone local be interested in calibrating a World Record?” Little did Jason know that post set into motion a series of events that would lead to 12 Light Painting Photographers from all over the United States meeting in a farmers field in the small town of Floyd, Virginia exactly 6 months and 13 days later to set the First Official Light Painting WORLD Record creating 200 Light Orbs is a Single Photograph!

The first thing we had to do was pick a date, after some debate July 19th, 2014 was the agreed upon date that the attempt would take place giving everyone plenty of time to schedule flights, get time off from work, and schedule time away from other obligations.

Next of the agenda was finding a location. Securing a location that is open, dark, and level enough to create 200 Orbs in a single exposure is not easy. The location also had to allow for a bunch of Light Junkies camping and spinning lights all night long. Many of us were located on the East Coast of the United Stated so Jason Rinehart, Jeremy Jackson and Aaron Bauer searched and searched and found a few suitable places but they all fell through for one reason or another. Jeremy Jackson had a friend with a piece of land near his home in Floyd, VA it was a pretty central location for everyone involved so it was finally secured, however the owner understandably didn’t want the event turning into a Light Painting Woodstock so a limit of 12 people was established.

The Orb Makers:
Jeremy Jackson, Christopher Renfro, Jason L. Rinehart and Aaron Bauer worked on building the “Orb Making Devices” that would be used to create the Light Orbs. Many designs were discussed everything from the traditional taped up LED light string to some super complicated mechanical devices. Jeremy and Chris came up with a genius design, The final Orb Maker was a series of metal and PVC pipes with a LED light string on the inside connected to speaker wire on one end, a counter weight on the other end and a old car window crank handle to make the spinning easy with an on/off switch in just the right spot! Hours and hours went into creating 12 Orb Makers and many thanks go out to Jeremy Jackson!

Most of us arrived a day early on July, 18th to get everything prepared and to get acquainted. The first day the weather SUCKED it was a dreary day with constant drizzling rain; despite the weather a lot of prep work happened on July 18th. We tested and made final adjustments on the Orb Making Devices, the base camp was set up and the location in the field was selected. That night we gathered together around a fire to come up with a final strategy to accomplish the goal of breaking the World Record! 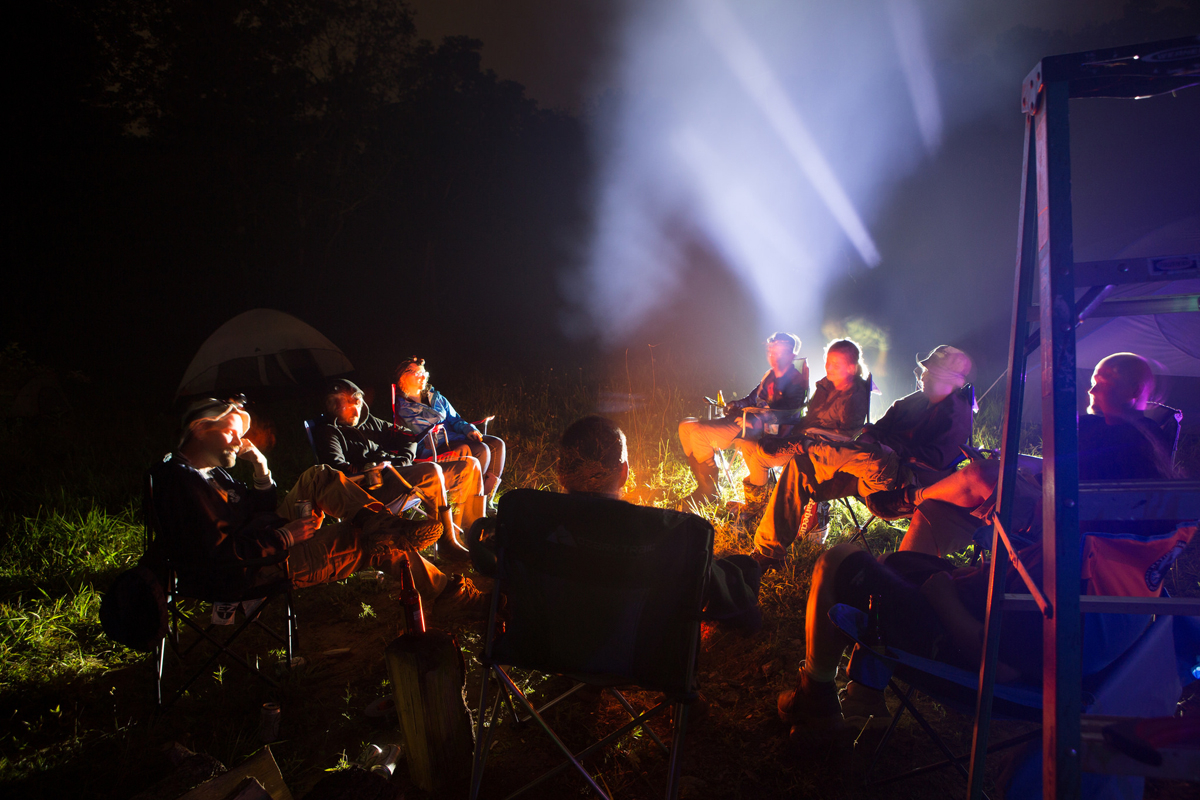 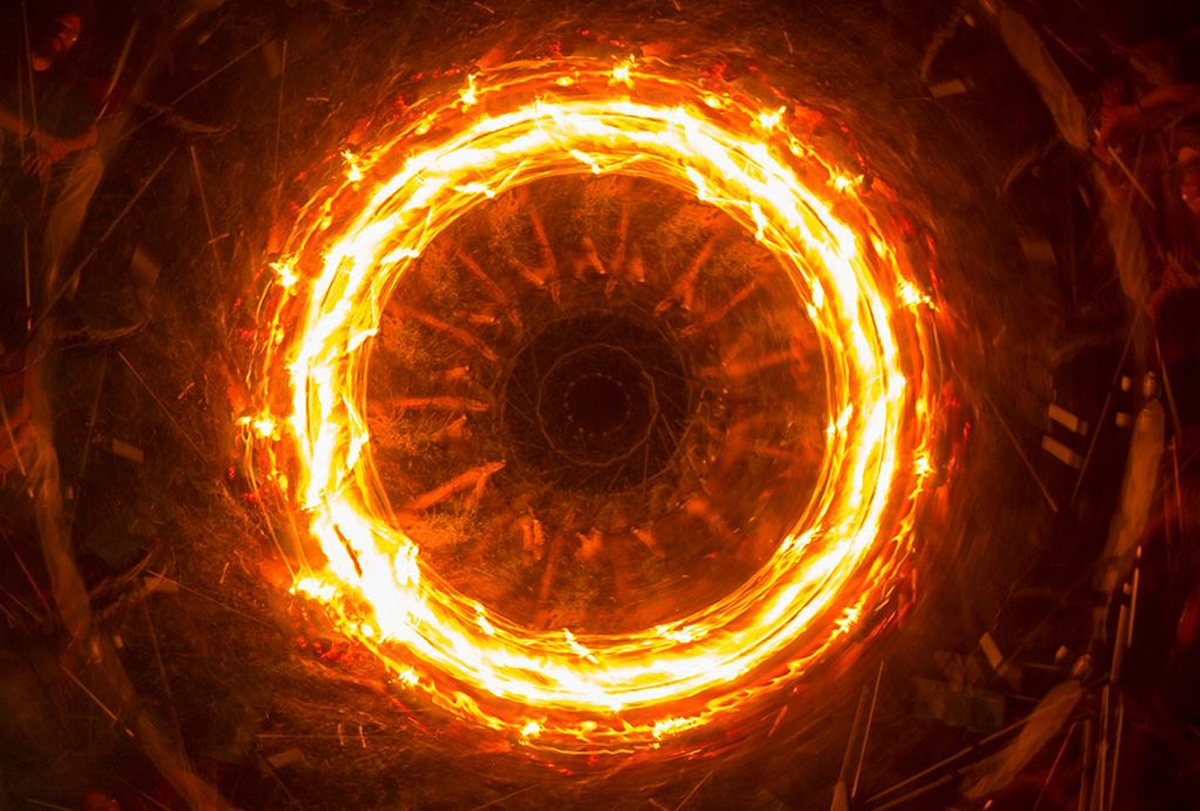 During the daylight hours of July 19th, 2014 thankfully the weather was better with clearer skies. Much preparation was left to do, we marked off the lowest section of flat land in the field in a rectangle shape 80’ wide by 160’ long. We posted a small yellow flag every 8 feet to mark the center location of the orbs that we would create, the record breaking image was set to be 10 Light Orbs wide by 20 Light Orbs long making a total of 200 Light Orbs in a Single Photograph.

The diameter of each of the Light Orbs was approximately 7 feet wide, we allowed for a 1 foot space in between so that the Light Orbs would be easily distinguishable from one another in the final image. The grass in the field was really high so Jeremy and Jason used weedeaters to mow the field around EACH of the 200 flags in a circular pattern to allow the Orb Making Devices to spin freely. 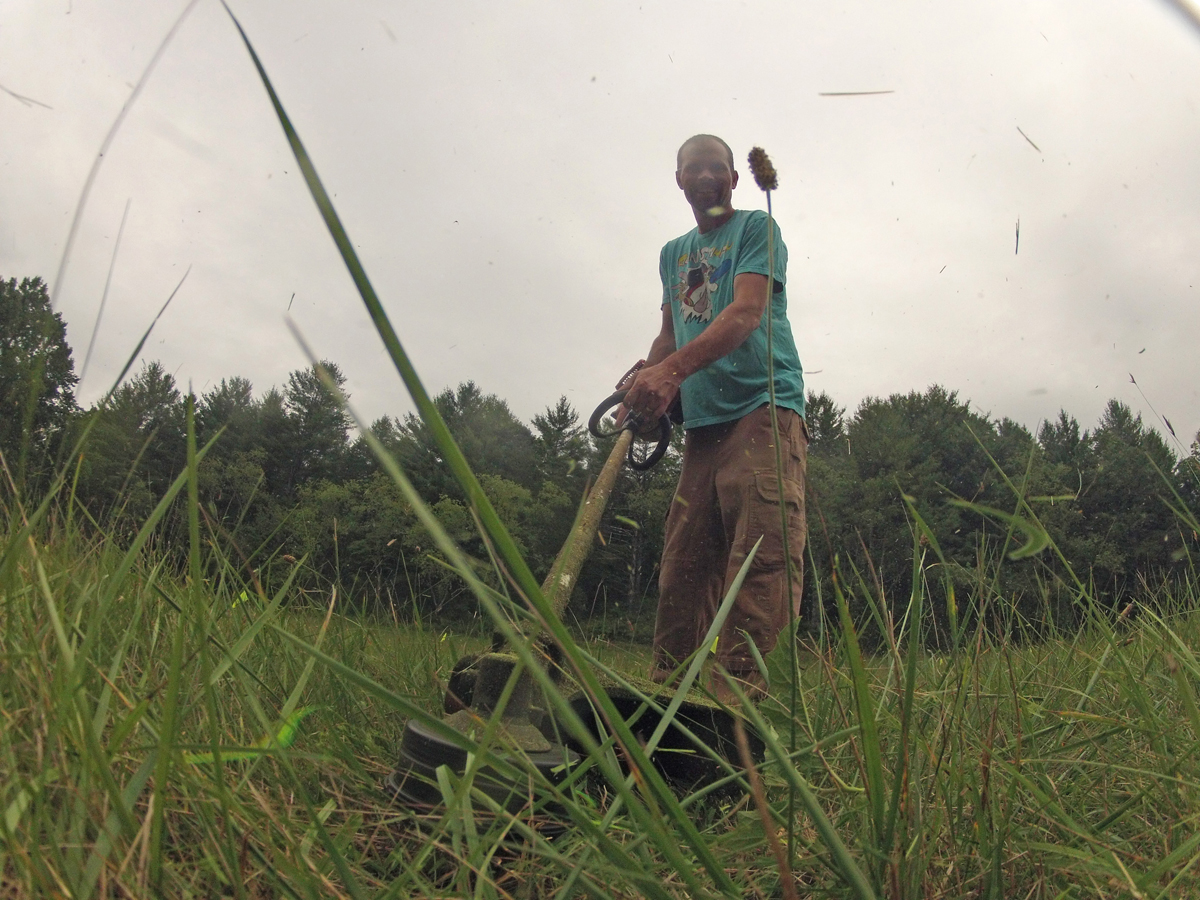 Other than the grass and the weather, another challenge was to find an angle high enough that would allow for all of the Light Orbs to be seen by the camera, to accomplish this there were a few different strategies. Jason Rinehart used a ladder and climbed high into a tree to find his angle.

Myself (Jason D. Page), Aaron Bauer, and Jeremy Jackson climbed to the tops of our trucks and extended our tripods as high as they would go so that they would be able to get an angle that would allow the camera to see all of the Light Orbs created. Everyone else moved around the field to find the angles they thought would look best.

As the sun started to go down and the light faded we took test shots to see how long the exposures could run with the amount of ambient light that was in the area. It was a very dark and desolate location, there was no moonlight and very little light pollution so the exposures could go for 30 minutes or more if needed without being over exposed. While some of us took test exposures others worked with their Orb Making Devices to make sure everything was working properly and they had the feel of how to make an orb with this new tool that many had never used before.

Just after the last bits of sunlight faded everyone was in place to break the record all lights were turned off and everyone’s camera shutters were opened. Dressed all in black the first victim, Aaron Bauer, walked into the scene, stood on the first marked location, illuminated his Orb Making Device and created the first Light Orb by standing on the marked location, spinning the hand crank in a circular motion, while rotating his body 360 degrees to create the Light Orb. After the first orb was created Aaron then moved to the next marked location a row ahead as another light painter came in and repeated the same process on the marked location one row across. We created the Light Orbs in staggered positions so that we would not block each others light from the camera’s view. 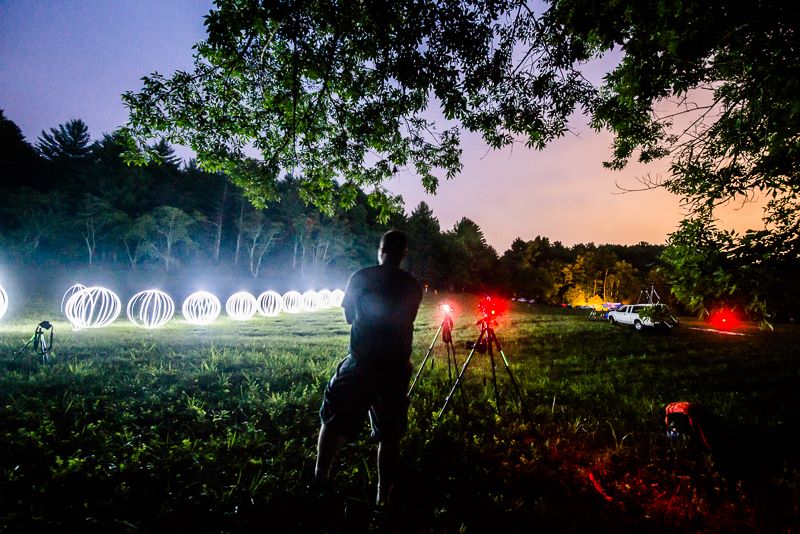 Once all of the Light Orbs were created the shutters of the camera’s were closed and the 200 Light Orbs were captured in a single photograph. We decided to create the image a second time, this time using handheld flashlights to illuminate the scene and some of the trees in the background. During both exposures we successfully created 200 Light Orbs in a Single Exposure! Each light painter had slightly different settings on their shots but the “Official” image for the Guinness World record was a 1651 second exposure, at F8, and ISO100. 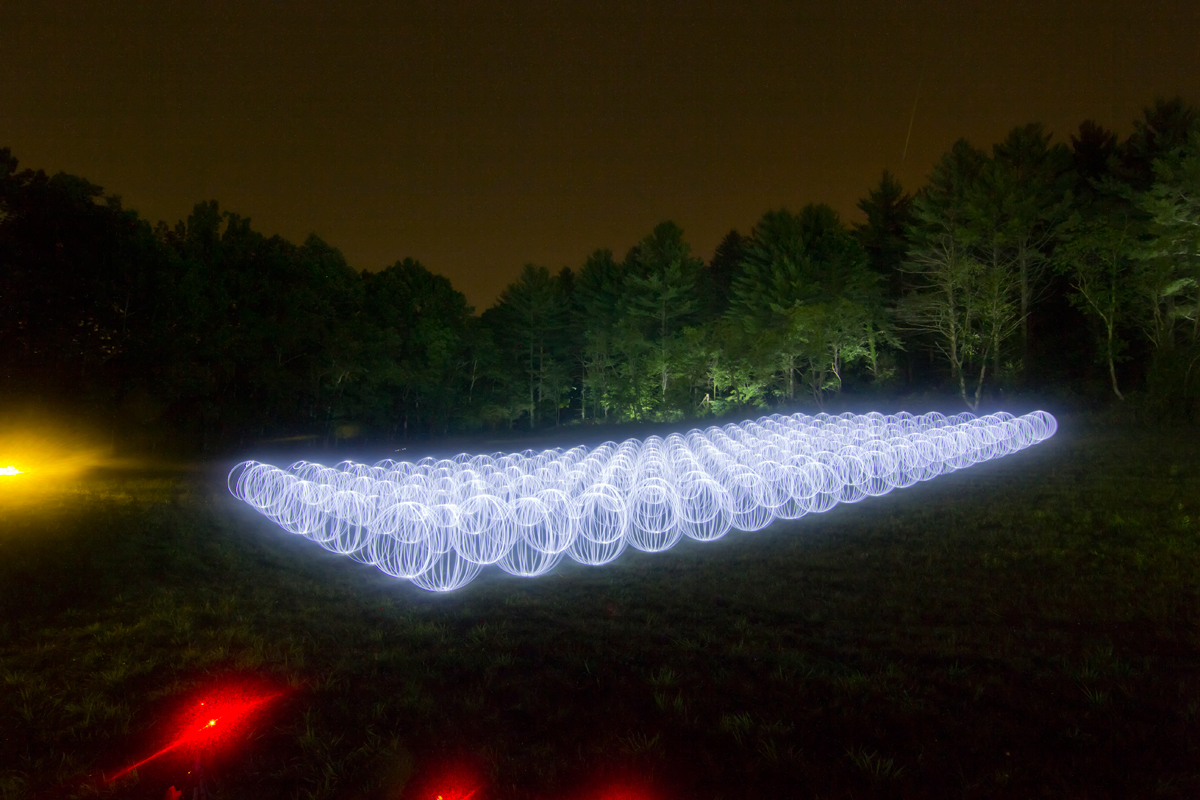 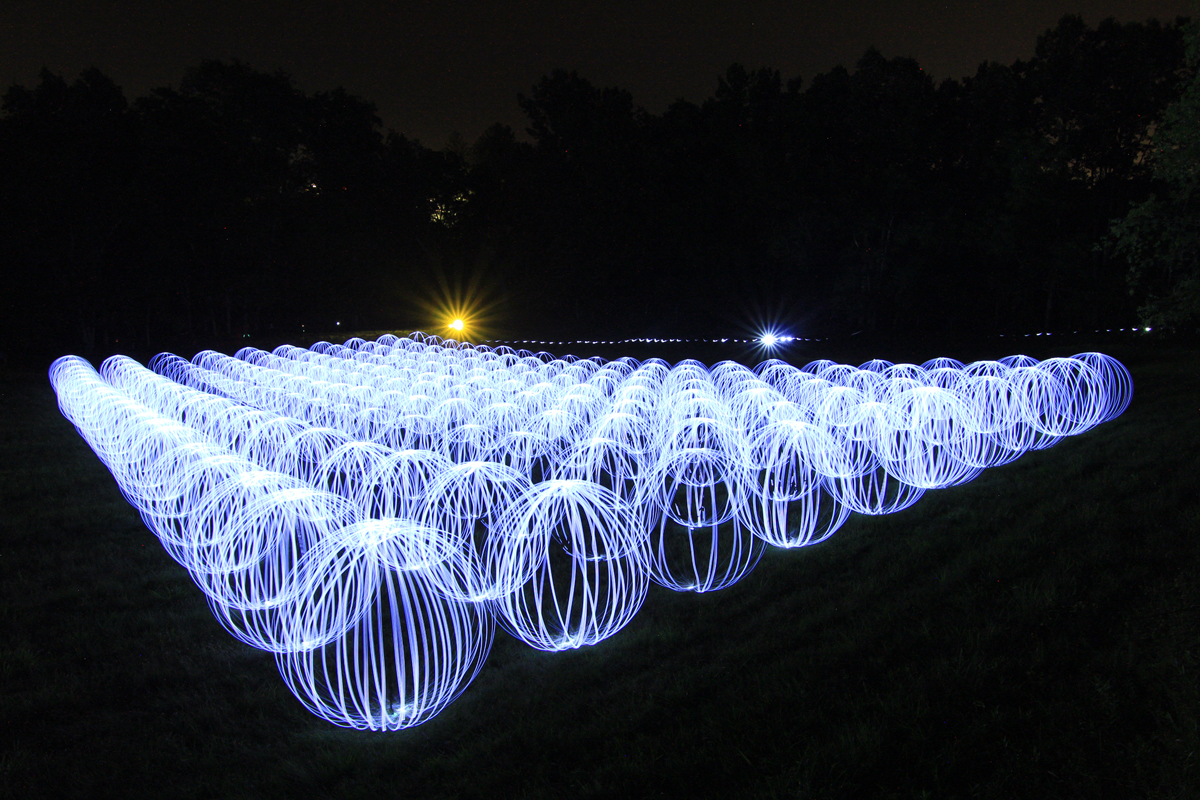 We decided to break this world record because we are all extremely passionate about the light painting art form. The hope of this project is that by having a record in the Guinness Book of World Records we will gain more exposure and introduce more people to the light painting art form. It was also a great reason for all of us to meet for the first time in person and work together collaborating on a project to progress Light Painting. Besides that it was F@#$!*% FUN.

A HUGE THANK YOU to our Guinness World Record Witnesses Jon Beard and Nicole Pradas!
For More Check out 200ORBS.com 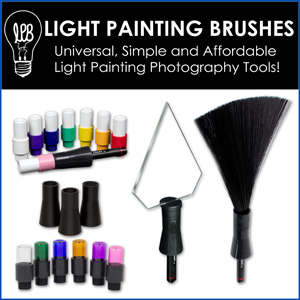 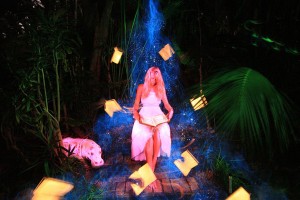 My name is Jason D. Page and I am a light painter. LightPaintingPhotography.com was born out of my passion and obsession with light painting photography. This is an educational website for the purpose of sharing the art form that I love and hopefully inspiring more people to … END_OF_DOCUMENT_TOKEN_TO_BE_REPLACED 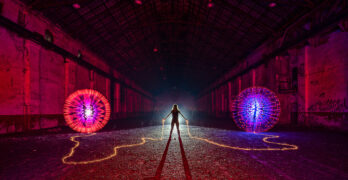 The winners for the Light Painting Photography ORB contest is the Light Painting Dynamic Duo of Lena and Madlen a.k.a. “Charisma Meets Light” for the fantastic image above that took nearly 25 minutes to create! Here is what Lena had to say about their winning creation! I started with light painting in 2018 and Madlen […]