You are here: Home / Break Down / Light Painting Break Down: Pala Teth for “Laser Web”

From time to time we come across a light painting and just stare it wondering how did they do that?!?! Break Down is a series if which I only ask the artist one question “How the F@#! did you make this” its up to the artist to tell as little or as much as they want. Recently Light Painting Photographer Pala Teth posted this mind blower up on his Facebook page after starring at this insanity for several minutes and then realizing I had lost all track of time because my mind was lost in this “Laser Web” I asked Pala to do a Break Down and he kindly agreed. Enjoy.

LPP ∇ Pala your new image “Laser Web” is nuts, How the F@#! did you make this?

Full Break Down by Pala Teth:
I organize an open Light Painting evening every Thursday, and for this particular Thursday, there were less attendees than usual. We were only 5 (3 light painters and 2 friends) and as Gregory Lamouline was one of the light painters, I’ve brought my Camera Rotation Tool (CRT) too. Gregory is a CRT enthusiast and I knew he will be happy if we spend time playing with our CRT.

To be fair, I’m a beginner in CRT photography. I’ve bought one CRT two years ago from Alan Thompson, the brother of the famous CRT specialist Chris Thomson, but I’ve never really used it yet. This picture is my third one since I’ve bought the tool. As a viewer, I love to watch the CRT pictures made by others. But for my own pictures, I usually forget to use this tool. I prefer to be in front of the camera playing with lights rather than being behind the camera and doing rotations. So this light painting session was unusual for me.

As Pol Lution -our third accomplice- does not have a rotation tool, he started the evening by shooting his ideas in the room close to the main abandoned industrial hall where we were. He was playing with UV paint and fire, and his experiments created a smoky atmosphere in this room. In the meantime, Gregory and I were searching in the main hall for the right spot and the best angle to shoot a picture I had in mind (“The Rat Race”, without laser).

The best spot for this picture was the door between the main hall and the room where Pol was doing his pictures, because the door could be used to control the backlight. I wanted to use a backlight for the model, to get a silhouette, but in an open space and with the wide angle lenses, the backlight was too large and it would have created troubles while rotating. With the door and a distant light source, the angle of the light triangle on the floor was far better. So we did our first shot there when Pol had finished his own ones.

We were happy with this first shot and while looking at the picture on the back of our cameras, it was obvious that the smoke was going out of the room behind the model and was spreading inside the main hall. The laser is the best friend of the smoke, so we had to give a try with the laser and a CRT.

I installed a green laser pointer on a light stand, behind the model, pointing towards the camera. I put a special head cap on the laser which split the unique ray into a circle of rays. And we lined up the laser with the model and the camera to get symmetric rays around the model. Pol -who is the model in this shot- has chosen an interesting posture. We did two test shots (without rotation), to check the camera settings.

The smoke was not really dense, so f/5.6, ISO 800 and 6 or 7 seconds were perfect to catch the laser rays. As you can see from the test shot, the smoke is coming from behind the model through the door, so the laser rays are bright around the model and then the light fades slowly away while the smoke becomes lighter in the rest of the hall.

In the same time, Gregory was doing a rotation in 8 steps, with his fish-eye lens and a lower focal length. And when we saw the results on the back of the cameras, I was like a child on Christmas morning! I love being surprised by the result of a light painting and this one was a great surprise for me. 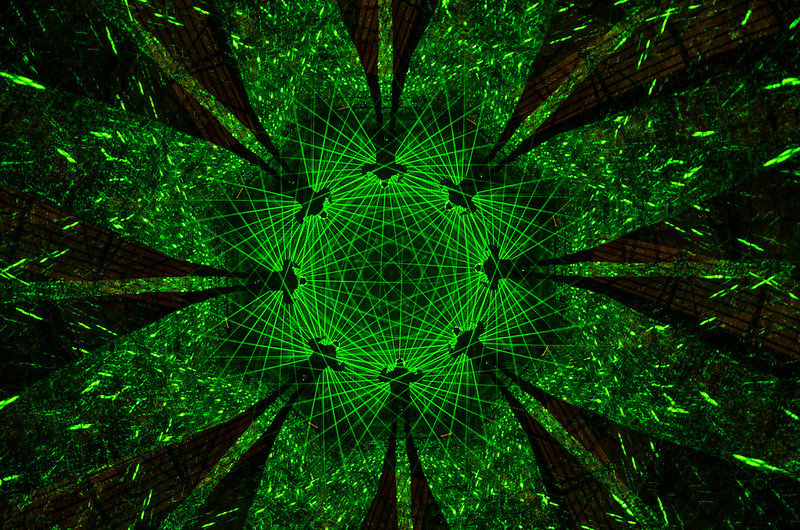 If you would like to learn all about Camera Rotation Light Painting Check out this in depth tutorial HERE!

My name is Jason D. Page and I am a light painter. LightPaintingPhotography.com was born out of my passion and obsession with light painting photography. This is an educational website for the purpose of sharing the art form that I love and hopefully inspiring more people to … END_OF_DOCUMENT_TOKEN_TO_BE_REPLACED

The winner for the “A Message Of Thanks” themed Light Painting Photography contest is Rob D’Angelo for the simply great image in a series of positive messages Rob has been creating during these uncertain times. This is what Rob had to say about his winning image. “This image has a lot of meaning for me. […]