Created and presented by Trevor Williams

So you had a 30D or 40D and decided to upgrade to a brand spanking new 60D.  You had already invested in a RS-80N3 or an even more expensive TC-80N3 timer remote or had already invested inboth. That fancy N3 connector made you feel like you had an accessory for a higher end camera.  This was more advanced that the old style 3/32″(2.5mm) stereo plug(Canon calls it an E3 connection) that had been used in the old days and is still being used on lower end consumer Canon DSLR’s.  You un-box that bad ass new 60D and head out into the night to break that new cam in.  You have set up your shot, or may have gone as far as tracking your telescope and mounting your cam to that, and now go to connect your N3 type remote.  Unfortunately, you are shocked by what you find.  It seems that some idiot at Canon decided that it would be funny to revert the pro-sumer 60D to the 3/32″(2.5mm) stereo jack connector that had been previously reserved for the lower end consumer models.   WTF? Canon.  This is not funny.  I have to spend more money after investing in the best they had to offer???  Did I just spend over 1000 bucks on a consumer level camera???  Luckily there is a hack…  All you need to know to fix this dilemma after the jump below the picture. 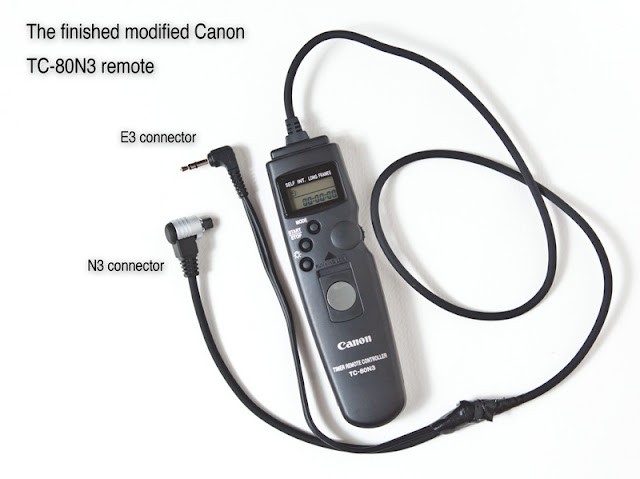 What happened was, a friend of mine decided it was time to upgrade his camera.  He was previously a Nikon shooter but was just working with a kit set up so it was no big deal to switch brands at this point.  The benefit for him, he explained, was that he could borrow my lenses when out in the field and essentially not have to buy them.  Sneaky bugger…  He wanted my help in making his purchase so he told me his budget and explained what he wanted.  With out much research I recommended the 60D and a TC-80N3 remote.  Having owned a 40D I thought that the new 60D would be a good choice for him.  He is into astro-photography and was looking for a cam to mount to his telescope so the timer remote would really come in handy.  I currently shoot with a couple of 5Dm2 as primary’s but bought my TC-80N3 a couple years back when I was using a 40D as my primary camera.  The thought of the TC-80N3 or RS-80N3 not being compatible with the newer 60D never even crossed my mind.  We got out into the field which was a 2 hour drive from town and spent time setting up and tracking the telescope.  He mounted the cam and tried to plug in the remote I recommended and it was not compatible.  I felt really bad.  He had dropped way too much money on something that would not work because I told him to.  I vowed to fix this for him and went about researching what I could do.  After surfing through a few forum posts I pieced together this tutorial which will guide you through how to change an N3 connector to an E3 connector which is just a 3/32″(2.5mm) stereo plug.  This will also allow you to use the TC-80N3 with any Canon (and maybe Pentax) camera with an E3 connection.  You can reverse this tutorial if you have a RS-60E3 connector and want to add a N3 connector to it.  You will need to find an N3 connector though. 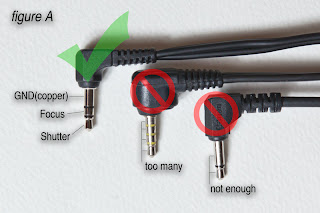 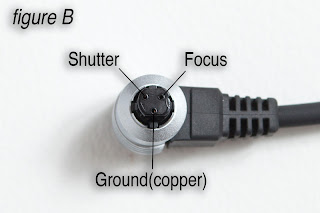 The first thing you need to do is to prepare the stereo plug.  Ideally, it would be a right angle 3/32″(2.5mm) stereo plug .  The idea behind the 90 degree angle is to reduce stress and weight on the female end of the connection.  It is not necessary but would be ideal so if you have something else lying around feel free to use that.  Make sure there is at least 1 foot of wire connected to the plug.  There should be a red, a white and a copper which is the ground.  The color of the coating may vary but you are looking for a a connector with 2 wires and a copper ground.  Generally the red wire will control the shutter, the white wire will control focus and the copper will be a return(GND) which is exactly how the N3 connector is set up.  *see figure B

Now it is just a matter of connecting the correct wires together with a bit of solder.  I actually recommend splicing in the 3/32″(2.5mm) stereo plug so you end up with a remote that is compatible with any Canon DSLR rather than replace it because who knows in the future what type of connector will come with your camera.  So take that expensive N3 connector remote and cut it about a foot from the connector end.  Prep it for soldering by stripping the casing off all the wires.  The copper wire will have no casing and be spread out around the other 2 wires so just bunch it up.  Be careful not to strip off to much as it really is not necessary.  Match the wires up from the 3/32″(2.5mm) stereo plug and the N3 plug and tack them together with a bit of solder.  More than likely, you will be soldering together a red and a red, a white and a white and a bunch of copper and a bunch of copper.  They should be aligned side to side and not end to end.  Put some heat shrink tubing on the wire connected to the remote.  Now take the wires you connected side by side and connect them to the matching wires from the remote end to end. You should now have something resembling a Y shape.  Slide the heat shrink tubing up and shrink it over you connection with some heat and you are finished.  If you do not have heat shrink tubing be sure to insulate the wires from each other with some tape or something that does not conduct electricity.  Tape it all up so it looks pretty and you are done.

Maybe Canon will get their act together and offer a remote like this one that operates either type in the future.  If they don’t people like us will just have to keep on hacking.  It would become a staple tool for any photog I bet… Maybe I need to patent this idea…

*Disclaimer – I am a professional idiot and not a professional electronics engineer.  Please keep this in mind.  I take no responsibility for damages to equipment or personal injury incurred as a result of reading this fine tutorial.

My name is Jason D. Page and I am a light painter. LightPaintingPhotography.com was born out of my passion and obsession with light painting photography. This is an educational website for the purpose of sharing the art form that I love and hopefully inspiring more people to … END_OF_DOCUMENT_TOKEN_TO_BE_REPLACED

The winners for the Light Painting Photography ORB contest is the Light Painting Dynamic Duo of Lena and Madlen a.k.a. “Charisma Meets Light” for the fantastic image above that took nearly 25 minutes to create! Here is what Lena had to say about their winning creation! I started with light painting in 2018 and Madlen […]